It’s time to close 2020 with our last update of the year, in what has been a very busy year. First, we’d like to thank everyone using the service this year, trusting us with your sim racing development and allowing us to help you become better simracers! We’re also thankful for all the feedback we’ve received, good or bad, because this is what helps us to continuously improve our products and service. 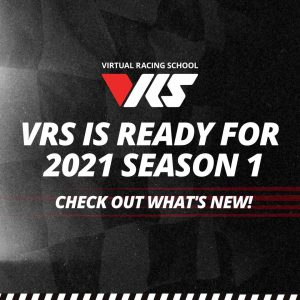 The last few months have been very important for our VRS DirectForce Pro product line. We scaled production for the VRS DirectForce Pro Wheel Base, we removed the reservations list and you can now purchase the Wheel Base directly on our web store. The price is US$799 / €899 (VAT incl.). The feedback we’ve received has been outstanding and we’re pleased to be able to provide high quality equipment at a highly competitive price. We’re also getting very close to the release of VRS DirectForce Pro Pedals. We recently shared a few photos and we expect to open sales in the first quarter of 2021! More details, including pricing will follow shortly.

We’re also pleased to announce a new coach is joining the group, J.D. Brown! J.D. is currently participating in the World of Outlaws Sprint Car World Championship series, gathering the elite of dirt oval. He’s highly experienced on anything dirt oval related and also drove in the World of Outlaws Dirt Late Model World Championship earlier this year, finishing inside the top 10. He’ll be working with Tim Ryan to expand our content offering for Dirt Oval.

Starting with 2021 Season 1, we are introducing a new add-on bundle, dedicated to Dirt Oval! Tim Ryan and J.D. Brown are covering the majority of Dirt Oval cars and series. You can find the full list of the datapacks covered at the end of this post. The add-on will be available at the start of this season, at the price of $4.99 / €4.99). People who only race dirt oval can switch to the Dedicated subscription and get the new Dirt Oval add-on. That will also give them full access to the four dirt oval datapacks included in the Competitive subscription.

On the Rallycross side of things, the Competitive subscription will now cover the Subaru WRX STI in the iRacing Rallycross Series, which will replace our Ford Fiesta datapack in the iRX Rookie Series.

On the Road side of things, we will cover the new cars coming to iRacing in the 2021 Season 1 build. The Lamborghini Huracan GT3 Evo, which will be part of the VRS GT Sprint Series and the IMSA Sports Car Championship, will be added to our current premium offering and available for all Competitive subscribers, as well as our dedicated subscribers who’d like to select one of these datapack. Jeremy Bouteloup (VRS GT) & Arthur Lehouck (IMSA) will be the respective coaches covering this car for this season. In addition to those, we will cover the newly released Dallara IR-01, part of the Dallara Formula iR Series. Martin Krönke will take care of this datapack, which will be added to the Grand Prix add-on (previously only including the MP4-30 datapack). The price of the add-on will remain the same at $3.99 / €3.99.

Over the past 6 months, we have been working hard to develop our partnership with Apex Racing UK. This has included partnering with their Leagues and Broadcasts via ARL & ARTV respectively. Further to this, Apex Racing Academy members have been enjoying our partnership with the ability to study exclusive data packs using VRS telemetry tools. We are pleased to announce that we will be expanding our partnership further for 2021 Season 1. Apex Racing Academy data pack addon bundles will be available to purchase directly within VRS. These addons will give our members greater choice in picking the setups that fit best with their own driving styles. See below for the full list of Apex addon datapack bundles.

We’ve also been working hard on providing additional content to help you improve and get ready for your races. We’ve recently released weekly Track Maps cheat sheets for the Global MX-5, with a bonus car / track each week. They are complementary to the video tutorials, helping you to learn and remember the important references for a track. We’re also looking to expand this to other series and we will provide bonus Track Maps for other series in the future. For more information, go to the following page: VRS Weekly Quick Reference Track Maps.

Another thing we’ve been working on is the Car Setup Guide, providing you with pointers on what to change on the setup when you want to improve the behavior of the car. We’ve released our first guide with the Nascar Cup Car, made by none other than Keegan Leahy. We’ll be looking to release more of them in the future, on both the oval and the road side of things. You can find the Nascar Cup Car Setup Guide here: VRS eNASCAR Setup Guide by Keegan Leahy

Finally, here is the full list of all upcoming coach and datapack changes:

The DirectForce Pro is now fully in production and can be directly ordered from the website (https://virtualracingschool.appspot.com/#/Store)

The pedals are nearing the end of their development and should be released during the first quarter of 2021. More info to come on that

A button plate for rims is still actively in development. Aiming to release it in the middle of 2021