“You can’t win a race in the first corner, but you can lose it in the first corner” is one of the oldest racing adages (another being ‘To finish First, you first have to finish’). And it’s one of the most valuable (and least adhered) lessons, as merely surviving the first lap can ensure a points finish, especially in the lower splits of road racing. But does first-corner-survival come down to mere luck, or is there some skill or strategy involved? We catch up with some of the VRS coaches.

Martti Pietilä:
“The most important thing about starting a race (and the first corner) is also one of the most fundamental concepts of racing overall: look where you want to go. When driving alone, this is quite natural, and most of the time we just need to think about how far we look, at either the apex or the exit. However, at a start there’s so much going on around us, we tend to forget this very basic requirement, and start to look at the cars around us. Especially if there’s a crash in front of us, we get so fixated on that and continue to plow in to the mess, even though there was plenty of time to avoid. The key here is to be aware of whats happening around you, not just looking at the cars around.

Lastly, if possible, I try to stay away from the middle of the track, so that an ‘escape’ plan is available if things go wrong!”

Jeremy Bouteloup:
“The best way is to think of all possible scenarios during the approach of the first turn, different racing lines and how you’ll have to position the car. This will help anticipating what will happen and will allow you to react in due time. A second thing is; don’t do anything unpredictable because that will increase the chances to be hit. Other than that, there’s no magic for this and with experience, you’ll learn when and how to react, and it’ll come naturally.”

Olli Pahkala:
“Keep up situational awareness, stay sharp and smart and try to avoid any sudden movements in a steady flow of cars.”

Martin Krönke:
“Heh, the easiest thing is just to qualify on pole. Less issues then! But still you can’t really prevent people running into the back of you. Perhaps if you notice in time that someone is going to overshoot the corner, you may prevent contact by not turning in. But if someone is messing up real bad, chances are you can’t do much at all. So really, if you’re in the pack, just expect the worst and be ready to react. Be prepared to brake and not run into the carnage. If the worst case doesn’t happen, good. If it happens, at least be prepared for it.”

David Williams:
“Regardless of where you start, your initial focus should always be on having a clean, disciplined launch. If you’re on the front row, try not to be distracted by drivers behind you. Be prepared to defend into turn 1 if necessary, and try and visualise the line you wish to carry through the corner before you get there. However, if you find yourself starting in the middle of the pack, it’s important to realise that you must give yourself the opportunity to react to, or take advantage of situations which will change and develop quickly. Be willing to brake much earlier than normal if closely following another car, as it’s likely they’ll be reacting to cars ahead and the pack will be backed up. Avoid erratic or aggressive inputs which may catch other drivers unaware, potentially causing a collision with you. At the same time however, be ready and aware of opportunities which may present themselves to you, and remember how much later you can brake if you choose a line with no cars immediately ahead.

One more thing, I consciously balance risk versus reward on tracks where it’s hard to overtake, or for sprint races compared to endurance races. But it’s also important to be aware that the rest of the grid are more likely to take extra risks as well, and to make allowance for mistakes from others to be made and ultimately capitalise on.” 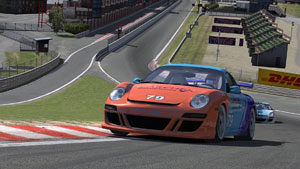 Simracing is harsh, and if you expect things to come easily, you’ll be quickly demotivated. Getting good is a long term project that requires time, money and focus. Here are four key areas to keep in mind as you plot your way towards all those simracing victories, which all four have to do with setting correct expectations.