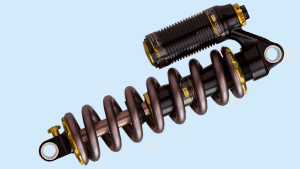 (If you haven’t read article 5.3 about anti-roll bars, please do that first, because this article builds on the same basics of physics.)

From the Skip Barber, we progress into a faster and more complex car: the Formula Renault 2.0. The FR 2.0 has more setup options available, including an important one, which will vary greatly between circuits: the selection of front and rear springs. The spring rates hugely affect mechanical grip, but also aerodynamics, which may surprise you.

The most common type of spring used in race cars is the coil spring, which is typically installed together with a damper (see picture). For this article though, we’ll focus solely on the coil spring, and ignore the damper until a later article.

Spring rates and their effects
The spring rate is the measure of spring stiffness, and represents the amount of force required to compress the spring a certain distance. It’s measured in Newtons per millimeter (N/mm) or pounds per inch (lbf/in).

As we see, springs don’t control a single variable in a straightforward way. So, finding the optimal spring rate is a matter of finding the right trade-off between the above effects, which is often a compromise. In practice, when setting up the car, adjusting spring rates comes in handy when optimising aero effects, and the tradeoff is typically between aero related time gains (lower drag on the straights) and car handling (more downforce in the corners).

The nature of the track would typically determine the baseline you start tuning from. With this we mean the bumpiness of the surface, and the lengths of the straights, and whether there are many fast or slow corners.
On tracks with fast straights and many flat, slow corners (such as Gilles Villeneuve, Montreal), you’d like to start with stiff front springs and soft rear springs. Such a setup would produce more rake (and downforce) in the slow corners and less drag on straights.
On tracks with short straights and a wide range of corner speeds (such as Motegi), you’d like to start with stiff springs on both the front and the rear. This would allow you have a car with more consistent aero performance in all corners regardless of speed.

Most tracks are in-between, so you’d want to pick a baseline for the overall profile, then look at the track specifics. For example, a bumpy slow track like Sebring could need softer springs. 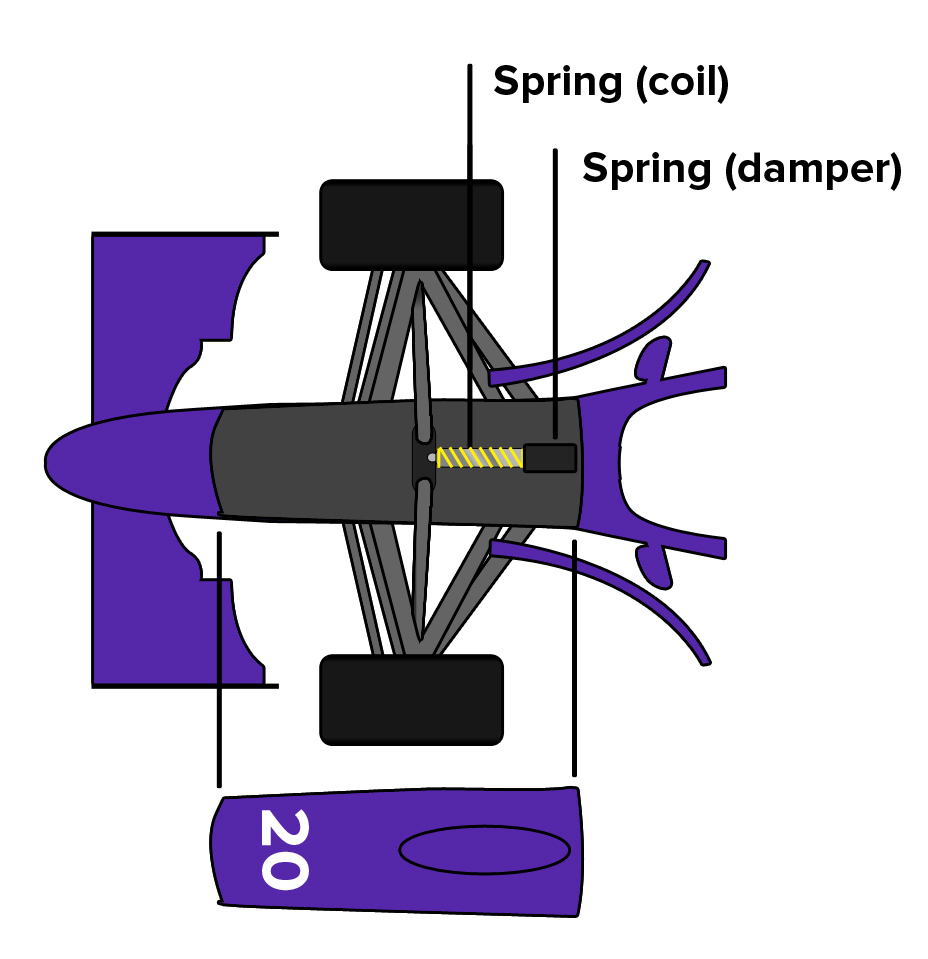 This single spring design at the front is called a monoshock. It is characteristic of a monoshock that the front spring has no effect on roll-stiffness. It only provides stiffness in heave (vertical) motion. This essentially causes spring stiffness to have no significant effect on the mechanical balance (lateral load transfer distribution and roll) of the car. And so the front roll-stiffness is solely controlled by the front ARB, which is adjustable in the real car, but is fixed in iRacing.

The regulations allow the FR2.0’s ride height to be very low, as a consequence you can run the stiffest front springs and still achieve your desired front ride height. This simplifies the front spring rates setup. In general, aim to run the stiffest springs that still allow you to go over bumps (if a curb is giving problems, you may not want to counter it through setups, but just avoid hitting it). Finding out the optimal rear spring rates will mostly be a matter of how much you want to vary the dynamic ride height in the back. Stiffer rear springs give you a more consistent handling through the corners, while softer rear springs will give less drag on the straights.

Try fiddling with the spring rates, and see if you can improve your laptime with it. For instance, load a session at Silverstone Historic. The circuit has fast corners and fast straights, so a compromise is needed between the two baselines suggested above. You pick either baseline as a starting point, for example stiff front and soft rear. From there stiffen the rear and see if it leads to laptime improvements. Because the rear spring rate changes multiple parameters of the car, such as the ride height, you could correct those accordingly to maintain the same static ride height. You can also use the anti-roll bar to help restore the balance of the car, just never change it together with the spring rates, because it makes it hard to tell which change is causing which effect.