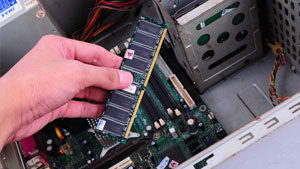 In the following series of blog posts we’re trying to shed some light on the various hardware parts you need to have or – for some parts – should have. To make the chunks of information a little smaller and easier to digest, this is split into the multiple posts. See also ‘steering wheel, pedals & rig‘, and a summary.

First, we’re going to start with the computer hardware, as – no matter what you’re goals at iRacing are, the sim is running on your computer and obviously the hardware would has an effect on your racing experience.

To start, let’s dissect what components your computer is made of and which of said components actually do make a difference in how the simulation will run.

Typically a PC consists of a motherboard, a CPU, RAM, graphics card and a hard disk. Out of those, only the CPU and graphics card are major factors in the general gaming performance. To some extent, you might say the same for the RAM, but only if you regularly run out of memory in your gaming sessions.

CPU
A CPU consists of cores, and even though iRacing only uses two cores properly, a quadcore CPU is highly recommended, as it allows background tasks, such as telemetry software, to run without affecting frame rate of the sim. Having six or eight-core CPU isn’t needed, as almost no game would use them all. With more cores you’ll see significantly higher heat dissipation and energy consumption.

Next, clock speed and instructions per cycle (IPC) are important. Ideally you’d grab the latest and greatest you can find for you budget. For the cheapest build possible, buying used parts might be well worth a shot. Getting a high end CPU, let’s say choosing between a i5 or i7, doesn’t per se matter for the performance in the sim itself. Whether you’re getting an i5 or i7 does not really matter for getting good performance in the sim, but if you’re doing things outside simracing, such as video editing or rendering, getting a beefier i7 is worth it.

Graphics card
Both AMD and nVidia cards are competitive, so you can choose purely based on the preferred type of cooler and price. Typically, for simracing you’d want the fastest card you can afford, unless it is a dual-GPU card. Since SLI/Crossfire are not well supported by most simulations, you’ll only use half of the cards. If you’re planning to use triple screens, make sure your card supports that (look at max supported resolution and how many video output ports the card has).

RAM
As already mentioned before, RAM is not really a deciding factor unless you have too little. As of the time of writing this, 8GB is the least you should get. If you can afford it, 16GB is recommended, while 32GB is mostly an overkill, but a nice luxury if you’re doing massive multitasking.

Motherboard
There isn’t a definitive guideline to finding the right motherboard for your CPU. There is a very wide selection of motherboards on the market which can make it very difficult to pick one. First, make a list of all your needs. For example, CPU slot you’ll need, max supported RAM and number of RAM modules, USB and audio ports, support for overclocking, etc. Then pick a motherboard that fits the bill.

Case, power, hard disk
With the above items covered, the in-sim performance is decided. Any other items you need, casing, power supply, hard disk, will not have a direct influence on how fast it is going to be, unless something is not up to the job. For instance, you don’t want to get a 500W power supply for a machine that’s going to draw more than 500W, obviously. For good efficiency and longevity of your PSU (power supply unit), aim to draw 50-70% of its supported power output.

DIY or not?
Should you buy a stock PC from a company like Dell, or a custom gaming PC from the likes of Digital Storm or a custom simracing PC from one of the simracing centric outfits? If you are on a budget, or don’t like paying 20-30% or more markup on parts, go the DIY route. Putting it all together is not rocket science and there are plenty of tutorials online. If you don’t trust yourself to do the assembly, ask at your local electronics store. The PC techs on staff may assemble the components you order online for you for a nominal fee. You can use a free service like PcPartPicker to select compatible components and find the best prices online. Or you can pick one of their build guides based on your budget and preferences.

There are some extra things to keep in consideration if you’re planning on overclocking. For your motherboard, grab a board that at least supports it. Typically the Z87/Z97 based boards are for you then. Also try to get a board with a capable voltage regulator section. As for the CPU, make sure the clockspeed is as high as possible, this is also helping framerates in most situations.

For your graphic cards, take note of its heat output. The lower it is, the better it is for overclocking. And finally, RAM, get an overclocking memory kit with DDR4-3200+ speeds.

Single or triple monitors
You can play iRacing on a single monitor, but if you set the correct Field of Vision (which you should always do), your visual area will be really small. Assume you’re in a racing car and you have a small letterbox to look through, imagine that’s how you have to start a race, pull off overtakes and defend positions. Racing on a single monitor is far from ideal. You’re spatial awareness nullifies, and it becomes harder to look through the corners and their apexes.

While it’s heavy on the computer, triple screens are the easiest solution. With the correct FOV you can see around you a lot, look through the apex and see cars racing side-by-side. Ideally you have three identical monitors, 21-inch or bigger. If you cannot do triple screen, consider an ultra wide screen monitor which will give you more pixel horizontally.

Some people opt in for large HDTVs and although they look cool, most TVs are not ideal for racing. You want a display that has low response time (ideally 1ms), low input lag (unfortunately not advertised) and high refresh rate (ideally 120Hz or 144Hz). Gaming monitors typically have these characteristics but usually don’t have “true” colors, which would matter if you are also doing graphics design on your racing PC.

Virtual reality
Recently, iRacing launched an update to support the Oculus Rift. While it’s early to say, there have already been world class drivers using the Oculus Rift while getting good results. It seems a viable option, if your computer can run it. One of the biggest issues with the Rift is that your head can get hot while wearing it. Expect a lot more from virtual reality in the near future.

Continue to the second part of our hardware story, here.