Graham, how did you get into racing?
My whole life has been about racing. My dad owned a motorsport business, and before I was ten I was racing in karts. I spend my college years running a karting team all over Europe. My younger brother, Niall, also started karting and eventually got picked up by Red Bull as part of the junior team.

After karting, I rallied on a national level, but in 2007 I quit racing, and got a job as an Engineer in Prodrive’s WRC team, who were racing Subaru’s. I thought I was good, but when I joined a team like Prodrive, I got to see how a team like that works, and the level of skill of their drivers. I noticed they had completely different skills than I had.

I competed at the top national level of rallying, but no way I could compete with drivers like that. So I think it was a relief, the disappointment of not racing anymore became a closed book very quickly.

In 2012 I moved to a private team in Belgium called First Motorsport, who ran some Mini Cooper’s and Subaru WRC’s from ProDrive, which were then driven by Stephane Sarrazin and Robert Kubica. My role was much broader there, engineer as well as assistant team manager. Which showed me the other side of motorsport as well, how difficult it is to get logistics and finance in order. There’s an incredible amount of stress involved when you’re trying to raise money to go rallying. Then in 2014 I made the jump to the US with Andretti when the Volkswagen Rallycross program kicked off.

You’ve had the driving as well as engineering experience. Which one is more nerve wracking?
I think as a race engineer I’m even more nervous, because you’re just waiting for something that you had control over to go wrong. Even when your driver is leading by ten seconds, you’re always thinking about what could break down. As a driver in the car, you know what you have to do. But as an engineer it’s out of your hands. 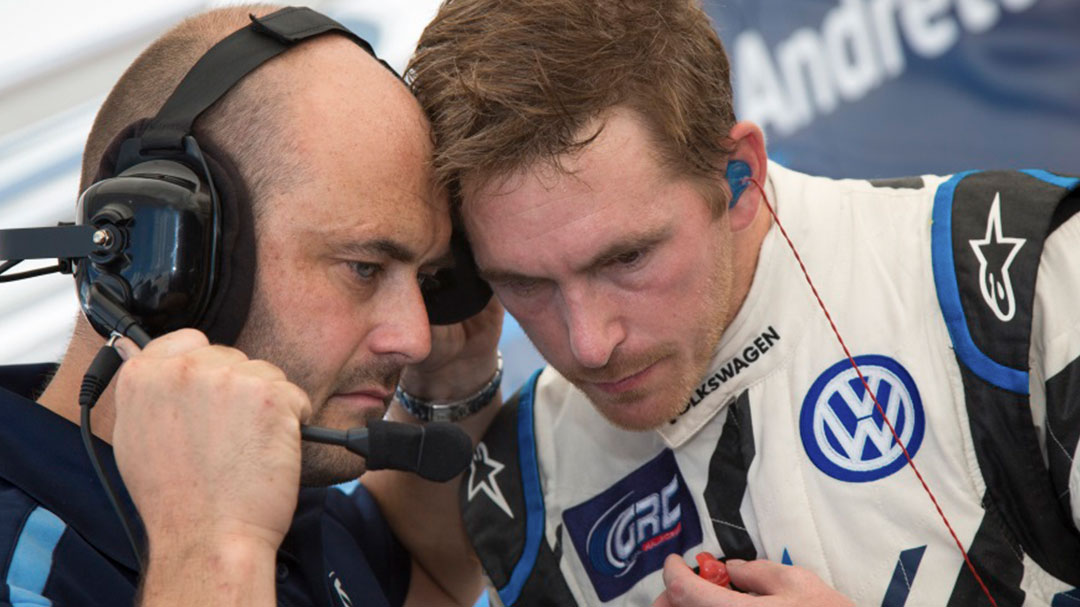 Do you miss racing? And is that were iRacing comes in?
No, I’m not really one of those former drivers trying to get back into the car, proving I’m also quick behind the wheel. I got as much pleasure winning rallies and championships, as an engineer, as I would have as a driver, maybe even more.

That said, iRacing is a lot of fun. Last month, Scott and me did a Blancpain race, and we won! But on Saturday my brother and an ex-Champcar driver did another race, and I was supporting them from my basement, checking their fuel consumption and tyre strategy, and they also won. I enjoyed that just as much. So yeah IRacing gives me something, but it’s not just the driving, I enjoy the setups, strategy, everything.

Maybe some people think I’m strange that I take my work home, spend another two hours in the sim, but it’s just an addiction really.

As an engineer, do you understand Scott better now that you’re sharing the car in iRacing?
Well yeah, I can see his skill levels for sure. Whatever I do, I can’t really get close to what he does. And he’s exactly the same in the sim as in real life. From the first lap he gets it, he doesn’t overdrive, and it seems to come so easy to him. And I enjoy driving with him, it’s also bonding between an engineer and a driver.

What was your role in iRacing Global Rallycross?
It started over a year ago, and it’s been almost a daily involvement. Even today I corresponded with them again. It just blew me away how closely they model the car. They have a great model for the chassis with many kinematic points. We worked on weight distribution, the centre of gravity, damping. And we used our real life data to match that in the sim, matching torque levels with acceleration rates, turbo response, all of that.

It’s so close now that I could even send them a few request to make modifications in the sim so we can test them for real life racing. I believe iRacing has that service for Nascar teams too. It’s just like an F1 sim, really.

What makes Global Rallycross unique in your view?
The variation of surface really. It’s basically a rally car chassis like in the WRC, with perhaps differentials and transmission a little less sophisticated, but a better, more powerful engine. And then you’re trying to make it work like a touring car at some parts of the track. So it’s a balance on which parts of the track you want to be fast.

That’s a balance and you’ve got to get through it quickly, because in race weekends there’s just one hour of practise before you go into qualifying. That’s why we do a lot of simulations, so before the track we know what the base setup is going to be like.

Scott said mainly the differential is important, the rest isn’t so much. Do you agree with that?
He has a point. Even in a WRC car, the first thing you look at is the wheel speed and how the differentials are working. The second thing is dampers, they play a massive part as well. You’re looking for traction on dirt, and support on tarmac. Very difficult to make a damper do both. But I do think we have a really good damper package. But diff’s are something Scott is very sensitive to, he can feel the difference between 5Nm of preload. But after the differential and dampers, the rest of the setup comes quite easy.

So now with iRacing Global Rallycross, you’re driving your own car. What surprised you?
Not anything in particular. I watched so much videos and data so I think I was already aware of the limits of the car. And those limits are way below than what most people would think! To be efficient in this car, you need point to point driving, and I think that’ll surprise everybody. It’s just a car that’s really really difficult to drive, well, easy to drive but difficult to be fast.

Our car has evolved that way from a typical rally car, into a more touring car. I think it’s mainly because of Scott’s input, even though our other driver, Tanner Foust, has a rally background. But we always improved the car on the tarmac section, so it’s a really efficient car, but not easy to manipulate. It takes a specific driving style, and you have to learn it, basically by copying what Scott does. He has really set the standard in rallycross, he has changed the way people drive. It even crossed over to FiA rallycross now, I mean Mattias Ekström and Kristofferson, Solberg etc are now doing the same thing: driving straight from curb to curb, not sliding anymore. Just searching for that limit of grip. 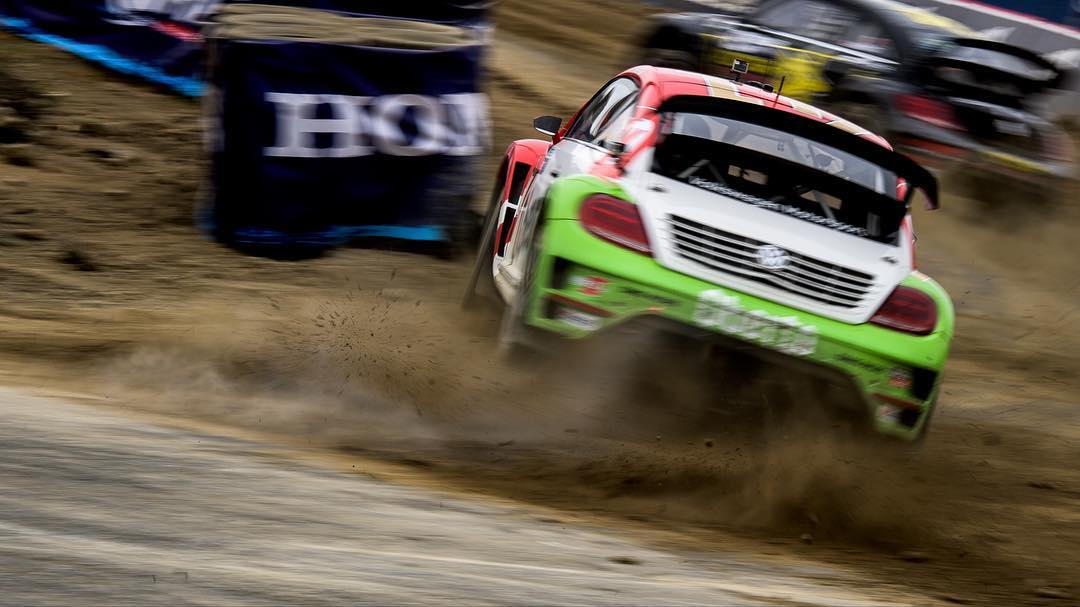 What do you think VRS will be most useful for?
Driver inputs. To see when Scott brakes, when he’s going back on the gas, when he’s sliding and feathering the throttle. The interesting thing is that on most tracks, it’s less than ten percent full throttle for the full lap. That’s how much is coasting and feathering. That’s where you see a lot of Rallycross cars smoking their tyres, and after after three laps they’re just finished.

Actually, VRS might give away too much in this! What might be difficult is to see the state of the gravel or dirt, because that changes every lap, so you can’t compare your laps one-to-one because you can’t tell what the condition of dirt was in at that time. But you can still see how tidy and efficient good drivers are.

How comparable is VRS to real life data and telemetry?
And VRS is quite comparable. VRS is a little bit simpler, and I really like the interface and layout. You don’t have to be a data engineer to be able to read it, but you still got everything there you need, even on the very first page. You can see where you’re losing time, and it’s easy to alt-tab out of iRacing, check and try again. It’s a really useful tool, and I think you can’t do without it, if you’re taking iRacing serious.

What makes a good engineer in motorsport?
In my experience the best ones are very hands-on, they think quickly on their feet, and don’t rely too much on only their education.

I usually find that some of the interns we have gotten over the years are very green when they come out of the university. They only think about looking at the data, physics or electronics, but being an engineer is also about working together with the driver. Maybe the motorsport specific education is the problem, it really puts blinkers on young talents.

As an engineer, if you can’t interpret or communicate with the driver, understand what he’s talking about — well, it doesn’t take very long for the driver to lose his respect. As soon as that happens, you’re done.

But do you mean drivers are very difficult to work with?
Yes, and the truth is that the better they are, the more difficult they are to work with. I’ve worked with some of the best rally drivers and F1 race winners, and they’re different characters than what we’re used to be dealing with day to day.

Do you mean ego behaviour?
No no, they’re just very passionate. Their mind is so much focussed on what they’re doing, that they don’t have any bandwidth left to think of something out of that box. Sometimes you hear a driver and engineer argue with each other, and you’d think they’re going to hit each other. But then two minutes later, they settle on what they’re going to do, and it’s all fine. But you need that, you need the engineer to be as passionate about it as the driver. And to be assertive, that’s when you work well together. But like I said, if a young engineer comes in and doesn’t know how to handle that, it’s easy to lose respect. 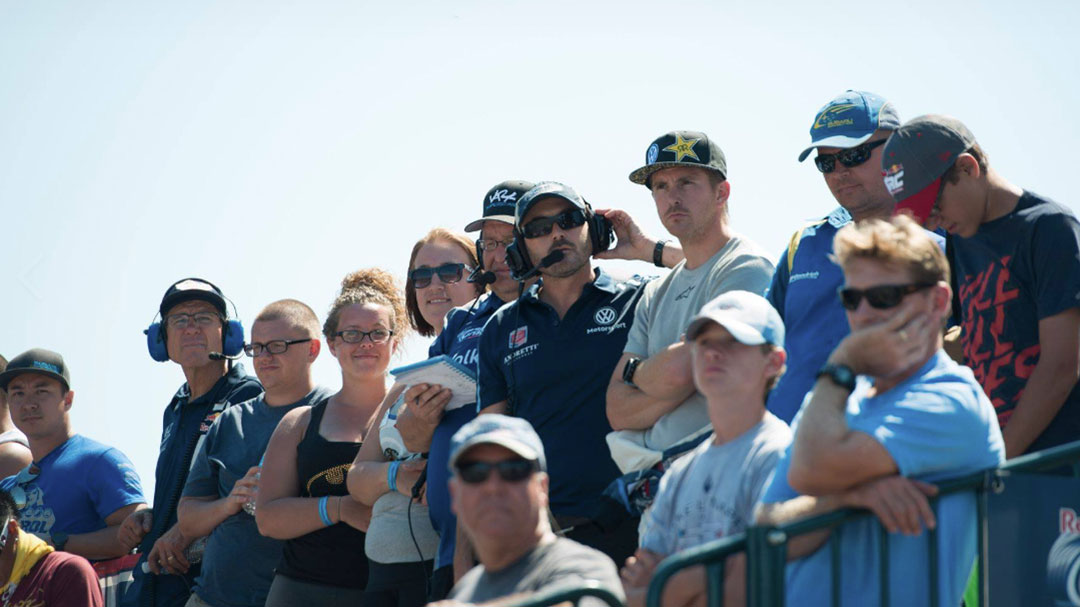 So what would be your advice to young students?
I’ve told many students this. If you have the choice, you shouldn’t go to a F1 team, but rather to a F3 or even Formula Ford team. There you’ll be hands-on and actually working on the car, from building it in a workshop and getting it to the track, and doing the data and dealing with the driver. It’s a much broader range of tasks. Whereas if you go to an F1 team, you become an assistant’s assistant and you get the shitty jobs the engineer doesn’t want to do, and you won’t even overhear the conversation with the driver and engineer. So you’re getting no experience.