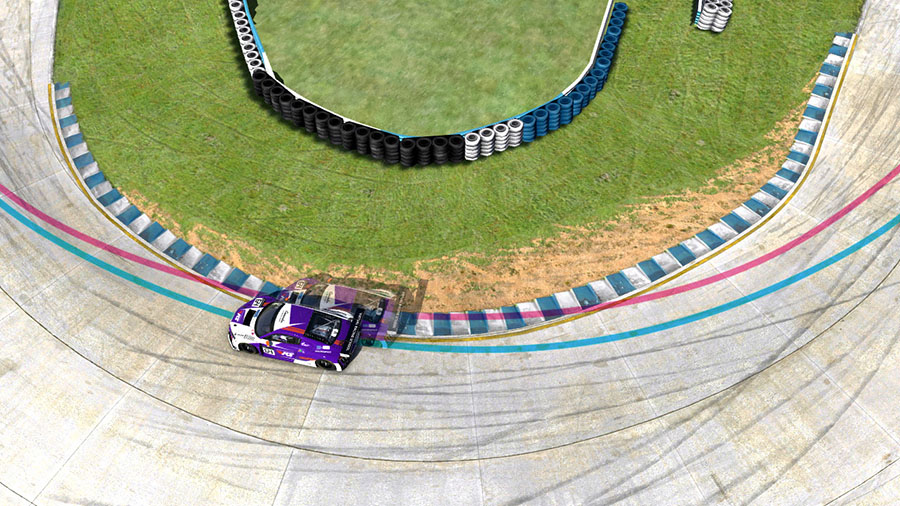 In the previous article, we discussed how to analyse your driving. We also discussed how, as you become more experienced with driving and analysis, your intuition for what you should and shouldn’t do will develop. This time, we’ll focus on experimentation.

Experimentation is a great method for unlocking potential improvements, because while you may reach a very high level of consistency in your driving, you may also be unaware of further opportunities to improve your laptimes.

Try new lines, new braking points, try being more aggressive with the wheel. It really doesn’t matter what you change, as long as you’re conscious of doing it, and are paying close attention to the effect it has. The result can of course be seen in telemetry, but if you’re using the live delta in the sim (tab key to toggle), you can have instant feedback on how much time you’re gaining / losing versus your best lap or sector up until that point.

Let’s take a look at an example of two different laps in the HPD driven by myself at Le Mans, driven in the same practice session. We’re looking at the first chicane along the Mulsanne straight. The blue trace is an early lap, and the purple trace was driven later, and is 0.193 seconds faster through this sector. 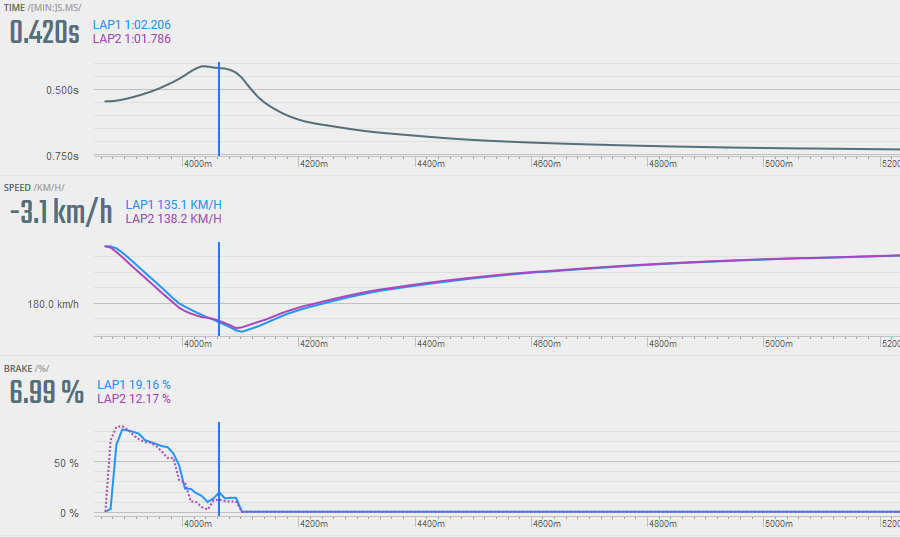 We can see on the bottom chart that in the early lap I was choosing to brake very late, optimising my entry into this complex. For several laps I continued like this, until my laptimes started to plateau. It wasn’t until I decided to experiment with braking earlier and a different line, that I realised how much time I was losing down the following straight by not prioritising my exit.

By braking earlier I was losing a tenth on entry, but I was able to carry a tighter line through the first half of the chicane, therefore opening up the second half and allowing a wider radius through the exit with an earlier throttle application. Even though it originally felt like I was optimising this corner by braking late, it actually proved quicker overall to brake earlier, sacrificing speed into the corner, then gaining it back on the long straight that follows.

iRacing allows for variation in the weather conditions (temperature, humidity, wind, etc.) for each session you drive in. In the respective series schedule you can see the time of day (morning / afternoon / late afternoon) used for each week, and our datapacks on VRS match this with the addition of always running with default weather settings. When testing offline, it’s possible to control the precise conditions which you wish to use, and it’s highly recommended to stick to the same weather for each practice session you do if possible. This way you can be sure when you’re gaining or losing time between sessions that it’s because of changes in your driving or setup, not due to weather conditions.

With this said, the weather for the majority of series in iRacing is variable, and it can therefore be useful to practise in different conditions to prepare yourself for whatever is thrown your way, especially if you feel you’ve reached your peak in specific weather. Just remember to be aware of the influence this can have on the speed and handling of the car. Colder temperatures are usually faster, with hotter temperatures reducing grip and making it easier to reach the limit of the tyres. The weather of your session is also logged in the VRS software.

You can turn this into a deliberate exercise to help develop a better feel for the grip available going forward. Ultimately, this is what can prepare people to drive at their maximum whatever race weather they encounter. It’s common to first attempt the same driving in different weather conditions, using your previous references and markers. Going from default weather to a hotter track may suddenly feel very difficult as the car can no longer decelerate enough from the same braking point. On the other hand, you may find you can brake at the same point and achieve the same laptimes, which would mean you were driving below the limit in default weather. Similarly, switching to colder weather doesn’t guarantee faster laptimes if you’re not exploiting the extra grip. However, once your driving style is adjusted, you can then re-attempt this on a warmer track and discover laptime in areas you weren’t previously exploiting fully.

It’s worth noting that track temperature affects different cars differently, and doesn’t just affect grip levels. The balance of the car can also change, for instance more understeer on corner entry. Wind speed and direction, along with many other weather variables alter how fast you arrive at various braking zones and can hinder or assist cornering in specific directions. Learning to adapt to these changes will improve your overall ability as a driver at getting the most from the car at any given moment.

The same principle applies to setups as well. You can all the knowledge in the world about vehicle dynamics, but unless you try things out, you’ll never produce the most optimised setups. Of course having the theory is important and can help you make educated guesses, but the most productive method for setup creation is still trial and error. Once you feel you can lap as consistently as possible, try making one or two setup adjustments. Avoid making too many changes at once, as this can make it difficult to understand which adjustment is producing the biggest handling or performance change. Observe the effects of each change, before experimenting on new setup parameters.

Experimentation can be used effectively to learn and understand the result each adjustment has on vehicle handling and performance for a specific car. Initially it’s a good idea to explore a full range of settings, especially in an unfamiliar car. Once you’ve gained this base-level knowledge, you can then go about experimenting with more intelligent prediction and focus, with the goal of not only extracting the most performance for a particular circuit, but also making the car behave to your personal preference. Without first putting in the effort to understand each adjustment on its own, it’s much harder to build setups in the future without wasting a large amount of time essentially making guesses in the dark.

Save setups regularly; use new names if you wish to retain previous versions, and make notes! iRacing provides a note taking page for each setup you produce, so take advantage of it. VRS also provides the ability to store setups for each stint you drive on the online app, and also highlight the differences between them.

Next time you head out on track to practise, make sure you allocate some time to analyse your driving, before attempting to apply a slightly altered approach based on what you may or may not have observed!