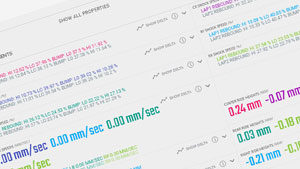 There are a number of third party software tools that integrate with iRacing to improve your simracing experience or to aid you in your driving practice or racing. If you are part of a team, there are some nifty tools for team communication and sharing files such as setup or replays. And if you want to record your races and/or stream them on e.g. YouTube, there is software to help you with that as well. Let’s dive in.

The biggest difference between the top racers and the rest is awareness, in the sense that top racers know when time is lost and why, whether something was a driving mistake or a change in the car setup. They’ll know when they nailed a lap, and they’ll know what they need from the car to squeeze out a few extra tenths. In contrast, the average racer won’t be able to tell you what exactly they did on their fastest lap, let alone know how to repeat it.

This awareness can be developed. The good news is that iRacing comes with a basic telemetry tool called the delta bar. It is enabled by default in test sessions and is otherwise activated and deactivated using the TAB key. The delta bar shows you the time delta of your current lap against a comparison lap and whether you are gaining or losing time at the moment. It is a great tool to build your awareness. For example, if you miss a shift and hit the rev-limiter, you’ll see how you start losing time on the straight and how much you lose by the end of the straight. Similarly, if you spin your wheels, you’ll know how much that cost you. And if you go smooth and clean, you’ll get a confirmation that this was quick. All that is great, but beware that the delta bar may be a distraction and can cause you to lose time. Don’t look at the delta bar in the middle of a turn. It’s best to take a very brief look before turn entry and after turn exit.

While the delta bar gives you feedback where you lose or gain time, it won’t tell you what you did differently, and this is where telemetry analysis comes in. By comparing telemetry from your laps, you can identify differences in your racing lines, or differences in your steering, braking and throttle inputs. By analyzing the patterns you can identify what you do differently in your faster laps compared to your average laps. Perhaps you didn’t realize that you go faster through the first turn by braking earlier than you typically do. Telemetry can uncover this. Once you have this newfound awareness, you can return to the track and pay closer attention to your braking point.

Telemetry works best in teams
iSpeed was the first telemetry tool to introduce a centralized public database of its fastest laps. This centralized database used to work pretty well until iRacing introduced dynamic weather. Telemetry is more useful the fewer variables changed between test runs, otherwise the comparison becomes skewed. For example, to meaningfully compare differences in driving style between two drivers, you need identical weather & track conditions and and identical car setup. A change in weather conditions can have a dramatic effect on lap times with identical driving style.

Comparing yourself against a stranger can be helpful, but typically you’d be better off being part of a team, because you’re more likely to be in the same session and thus same conditions as your teammate, and your telemetry data will be recorded in identical conditions. You can also ask for help to analyze the data, and to take lessons from each other.

Range of tools
There are a range of telemetry analysis tools you can use to analyze your iRacing telemetry. Tools like Atlas (by McLaren) and MoTeC i2 are used by professional real-life race teams and have plugins that allow them to read iRacing telemetry file format. But unless you have an engineering background or are highly technical, you’re probably better off with sim-racing specific software packages. They come with telemetry presets that make it easy to analyze your driving style, which is all you need to develop your self-awareness. Titles include iSpeed, iAnalyze, Z1 Analyzer. And there’s our Virtual Racing School which includes powerful telemetry tools.

Beyond improving driving style, telemetry analysis tools are extremely useful for tuning the car. In fact, this is mostly what they were originally built for. For example, you can use telemetry tools to find the sweet spot between higher topspeed or more downforce, or lower and higher tire pressures, or the optimal ride height.

For competitive teams, setups, replay and telemetry files are sacred and highly guarded from the competition. However, teammates want to freely share this data among themselves, thus they look for a secure way to share files across the internet. People have for the longest time been privately sharing files by uploading them to private FTP servers, or by been emailing files back and forth. Then, with the advent of services like Google Drive, Dropbox and OneDrive, sharing files in the cloud became the new norm. Nowadays, sharing telemetry and setup files within a team is possible with the team features of Virtual Racing School or iAnalyze.

During practice and race sessions it’s nice to keep each other updated and share information as the session unfolds. Then, team communication is great for after-session banter. Skype is a good option, because of its popularity. Specially built for gaming are the offerings of Teamspeak, Mumble, and Discord. If you want to use Teamspeak or Mumble, you need to host your own server, or host in with a cloud provider, which comes at a cost. Discord, a relative newcomer in the space, gives you free servers and features a very clean and modern looking UI. On top of that, you can run it right in your browser, without the need to install any plugins or add-ons.

A ton of people share videos of their races on YouTube or Facebook. You may wonder how they do it. Since 2016 Season 2, iRacing supports video capture. Press Ctrl-Alt-Shift-V inside iRacing to toggle video capture on or off. The videos will be saved in Documents\iRacing\videos. If you hit some of the limitations of the iRacing video capture, you may want to look at 3rd party software like Fraps, DxTory and Open Broadcaster Software. And you definitely need one of those tools if you want to stream your racing live to e.g. YouTube or Twitch.

What telemetry analysis tool should I pick?
If your teammates already use a given tool, it may be easiest for you and the team to just stick to it. But if you are new to telemetry or eager to try something new, we recommend Virtual Racing School. We are constantly working on improving VRS and in our opinion it’s ease of use is unmatched by the competition. In addition, we will give examples using VRS later in this guide.

What VoIP software should I pick?
If you join a team that already has something in place, just stick with it. Otherwise, our recommendation is to go with Discord. Its free, it’s very easy to use, has a slick UI and is under very active development.

Do I need video recording software?
You don’t really need it. Recording your racing won’t make you faster. However, if you want to create a racing archive, or want to show off your skills, do it! If you want to save yourself time researching the options, just go with Open Broadcast Software. Coanda Simracing driver and VRS coach David Williams uses OBS Classic to record his VRS driving tutorial videos.