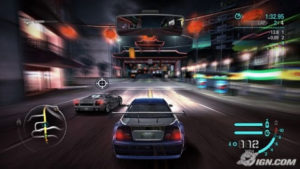 In 1994, Playstation was introduced with the fantastic slogan: ‘Live in your world, play in ours’. And that’s true for any game we play, all built on escapism as we crave for carpe diem. We rescue princesses from castles, play as knights in worlds of fantasy and join armies of modern or futuristic soldiers.

There is no right or wrong. All racing games are equally fun, all equally a test of driving skills in their own context. But for the sake of this article, we’ve divided racing games into three categories of realism.

Sometimes, the case for games being arcade-ish is obvious, like when you’re traveling over 700 km/h through futuristic cities in WipEout, or shooting blue shells in Mario Kart, or doing loopings in TrackMania.

At other times, real car models are combined in realistic cities. Look at any screenshot of Need for Speed, Burnout, Ridge Racer or Midnight Club game, and it does look realistic.
But while racing an exotic car against oncoming traffic on a highway, or through the heart of a city, could potentially be set in simulator physics, none of these games approach, not even nearly, true-to-life physics. The cars drift on very low speeds, and on higher speeds the mechanical grip is enormous. Arcade racing games completely lacking real world variables such as fuel usage, damage, tyre wear, grip, suspension- or weight models.

The learning curve is pretty flat for these games. Grab a controller and go!

Simcade racing games try to hit the sweet spot between fun and realism, between the easy to play arcade games, and the highly technical simulators. This way they can cater to the masses, and give them a feel of what it’s like to drive a racing car, somewhat realistically. 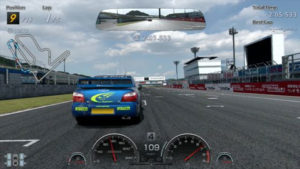 Just don’t be confused by slogans such as ‘The real driving simulator’, or the way Gran Turismo promotes gamers from their academy to real life racing. While it’s commendable, it’s also clever marketing. While these games do feature tire management, weight distribution and suspension models, there are still choices made to promote gameplay at the expense of realism.

Games such as Gran Turismo, Forza Motorsport, Project Gotham should make no claim to being a real racing simulator. The Grid, Dirt and Formula One series by Codemasters fall into this category. Whether Project Cars is a simcade, depends on who you ask, and how many assists you turn on or off.

The learning curve for simcade games is there. It’s just not that steep.

Coanda Simsport driver and VRS coach David Williams on the differences between Gran Turismo and iRacing:

David: “Gran Turismo is excellent for casual gamers, but it lacks the fidelity, individuality and detail you’ll find in a true sim. It also lacks a well organised online infrastructure which iRacing excels in. If you want to race against the best, iRacing is place to be.”

On his brief spell in the Gran Turismo Academy:

David: “I qualified for the Gran Turismo Academy. Obviously I had to learn the game very thoroughly as you never knew what car and track combination they’d run in the national finals where you had to be at the top level in a very short race. The whole GT Academy experience taught me a lot though which I can carry in all of my racing efforts, least of which is performing under pressure.”

With sims, the choices made by their developers lean towards realism, not gameplay. They’re still games, but also tools. Many real racing drivers use them to learn the tracks and the cars for real life racing, testimony of all these drivers who use iRacing.

You’re out of luck if you don’t want to race with a cockpit-view camera, a manual gearbox and no ABS or traction control. In a sim, it’s difficult enough to control the car, let alone drive a clean lap or a full race. Racing in a real simulator is extremely finicky, a mentally draining task. 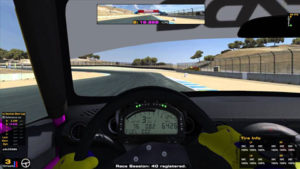 Simulators feature complex car models that, while you drive, calculate the way the suspension handles and the weight distribution of the car. The grip levels of the tires fluctuate through stints due to tire wear, and throughout the lap due to temperature build-up from locking up a wheel or taking high speed corners.

The tracks are also equally complex, typically laser scanned to carefully recreate every bump and crack. Throughout a session, not only the temperature of the track changes, but also rubber from the tires accumulates on the track surface. Further variables include wind speed and direction, humidity and air temperature. Then there’s the setup of the car, that consists of dozens of parameters.

There’s no hopping into a car and going racing. It takes hours to practice on a new car and track combination. This all means that the learning curve of a simulator is steep, and it easily would take you over a year to reach your full potential.

Do you enjoy racing more than crashing in a game?
Are you willing to dedicate lots of time to the learning curve of a serious racing sim?
Are you willing to learn not just by driving, but also by telemetry?
Are you seeking that ultra-high focus and competitive racing game?

If the answer is yes to all, you can go simracing!